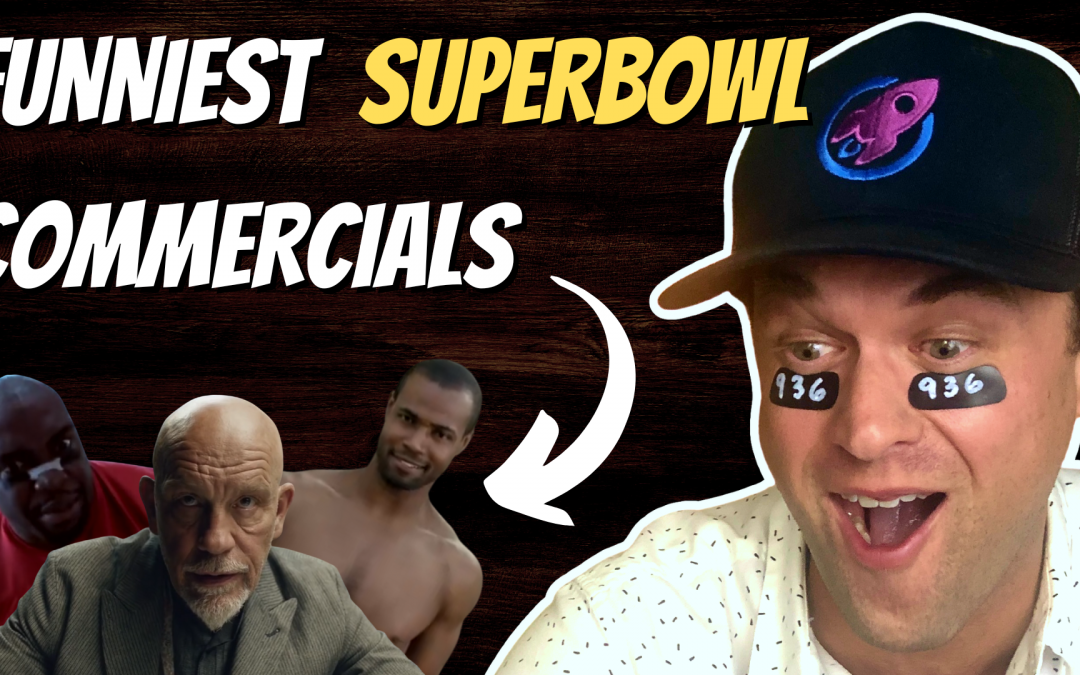 Matt: Okay, Casey, it’s time to grab your Doritos, your Bud Light, and sign up for that Go Daddy account because we’re talking about the funniest super bowl commercials of all time!

Casey: I’m ready for this.

Matt: Let’s do it. All right. Let’s jump in to the funniest commercials from the super bowl ever.  The year was 2003. This is a frequent competitor on the list, Bud Light.

That’s so good. So I actually have no memory of that commercial.

Casey: Something about the clown is familiar. I love that they never actually showed him drinking. But it’s everyone else’s reactions that makes it good.

Casey: What year was that?

Next up. We’ve got 2016. This is Doritos. Another frequent flyer.

Matt: Yeah, I’ll put that more in the cute category.

Matt: Yeah, I wouldn’t put that in the hilarious category, but man, it makes a point. It touches a nerve, doesn’t it?

Casey: And to use kids to deliver these funny lines. There’s definitely an underpinning of some dissatisfaction that’s touching a nerve with people.

Matt: Okay. Now we’re moving on 2018. This is from the NFL. So they probably got a good deal on the air time.

Matt: Oh, it’s so good. And everyone knows that’s of course, riffing on the movie Dirty Dancing.

Casey: They brought in the best elements of it. But then just stiff and awkward in all the best places.

Matt: What if they had done that in an actual game? That would’ve been epic.

Casey: To tie it in. Yes. That could have been pretty, pretty awesome. So I like the guy on the sideline the best. He’s feeling it.

Matt: Okay. Here we go. This is from 2009, another Doritos commercial.

Casey: I love it. The take on the magic 8 Ball.

Matt: The casting was perfect. That guy was so zany, a little obnoxious, that worked so well. And a shot in the nuts is funny all the time.

You remember this one?

Matt: 2000 Budweiser. For a year, everyone was talking about this and they went on to make future versions.

And this is like January, February of the year, 2000. So we’d all just survived Y2K so we were just on a high. We were like, “we made it, we made it, man. We still have electricity. I can use my computer still.  This is incredible. My dial ups still cranking.”

Casey: We were all doing that.

Matt: You called anybody… And it was immediately… “waaasssuuuuppp.”

We were calling each other on our landlines.

All right. 2017. Squarespace. Do you remember this one?

Casey: I think so.

Next up, this ad in 2010 was a game changer. This changed the way that people did comedy in advertising. It’s immediately recognizable… 2010 old spice.

Matt: Oh, man, that changed so many things. Like just all the little unpredictable things. Everybody started trying to copy that style after that. And they still do to some extent

Casey: It’s still that quick pace, in camera, don’t don’t cut away. People are still trying to pull that off.

Matt: And we hadn’t seen anything like that before, so it was like, how did they do that? It was so good.

Matt: So to understand the brilliance of this, you had to have been around in 2004 to be familiar with the series of commercials that MasterCard had been doing up until that point, correct? That same guy doing the voiceover. And it was always, you buy normal things and then something in your life that was priceless price that you were able to do because you had MasterCard. Great move.

Casey: Big pop-culture tie-in. You know, well, celebrity actually. And then, I mean, personally, like if you’ve ever, when your wife sends you to the grocery store and it’s like, I don’t know about you, but I just forget the list.

Matt: Oh, I have to write it down or there’s no chance I’m coming back with what I’m supposed to get.

Matt: I forgot about the, Abe Vigoda cameo! Oh man.

Oh, that was good. I miss Betty White though.

Casey: Yeah, she was a classic. She really was.

Casey: I love that you don’t know when it’s over.  And the production and  cinematography. Whatever kind of ad… Like the perfume, all the light colors and almost overexposed all the way to the people on the beach. It just has that lifestyle. That to me puts it over the top.

Matt: I wonder how many different, like director of photography, cinematographer type guys they got to shoot. Did they get specialists in each one of those styles?

Matt: And no copy. I remember at the time, 2011. Remote start was pretty new. And so Volkswagen found a way to communicate this feature with Zero copy. I remember my reaction was the same as that kids. It was like, “what just happened?! He just started the car with his keys!”

And I love star wars, so that was me as a kid, I was the kid running around doing, you know, that force stuff to everything.

Here’s another one that everyone was talking about in 2008. E-Trade.

Casey: I remember that one.

Matt: Yeah. That’s a great ad. This one’s different to me than pretty much every other super bowl ad that we’ve seen, except for maybe the monster ad. Most of these are big brands, like Snickers.

You don’t have to explain Snickers or Doritos. But Etrade in 2008, not everybody was familiar with E-Trade. So they had to find a way to show you how easy it was to use. So the baby was brilliant and it was hilarious.

Casey: If I’m not mistaken, E-Trade did a huge, super bowl commercial years before this.

It was a bunch of monkeys laughing and dancing, making a ruckus on screen for almost 30 seconds. And then at the end it was like, “we just blew a million dollars on a super bowl commercial.”

Matt: We would never stoop that low…

Casey: We’ve never put fart jokes in any of our commercials.

Matt: Okay, so let’s talk for a minute about regular business. Can a regular business, budget aside, go and make an ad like this? Should they even if they have the money to spend?

Casey: Something funny, pushing the envelope kind of thing?

Matt: Yeah, I’m thinking more like the Snickers, Doritos versus like the E-Trade one we saw, like what’s on that spectrum of “I’ve built my brand, you know who I am” versus “you have no idea who I am.”

Casey: E-trade educated about the product. He’s talking about how “you just watched me make a trade.” There’s some elements in there of actually educating and showing someone how easy it is.

Matt: If you even see the product, like in that horse fart one, it was on the screen for half a second.

That’s all they have to do.

Casey: So I would say yes, Introducing humor, any brand can do that. I won’t say that any brand should do it. There’s probably some brands that humor is not the necessarily the way to go.

But, but that category aside, yeah, I think anybody can bring in something like that. Some elements they may not be as envelope pushing, you know, or, or solely around brand, like with E-Trade we saw where they had to talk about the product a little bit. But I absolutely think you can still be funny and build the brand while, while educating people.

Casey: I gravitate towards funny. But there’s been some really good, like more nostalgic type ones.

They used Paul Harvey’s God made a farmer. That’s fantastic. That may one of my favorites.

Casey: In terms of humor, I love the star wars one. I feel like it was so simple and engaging. Because clearly he’s trying to do this and there’s a payoff coming. And you’re gonna watch it to figure out what that is. So I, I think that was probably one of, one of my favorites in this series.

Matt: Yeah. It’s definitely my favorite. But there was a lot of good ones in there. A lot of classics anyway, that’s it? Funniest, super bowl commercials of all time!

Want to make your own funny commercials for your brand? Check out our FREE Training: How to use Funny Ads to Increase Your Sales